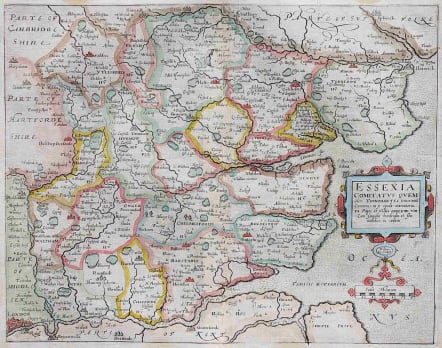 A very attractive early 17th Century map of Essex based on the first survey of England and Wales by Christopher Saxton (with improvements by William Smith) and published in William Camden's Britannia* (London: 1607-1637).

The map is decorated with an ornrate title cartouche and a compass rose. The city of London is shown in the lower left hand corner of the map. Blank verso.

Map appears to have old colour.

9 leaves of text relating to Essex from the Britannia are included with the map.

William Camden (1551-1623) was an English historian and antiquary who devoted himself to the study of the antiquities of Britain, travelling round the country visiting sites. The results of his work were brought together in the "Britannia", first published in 1586 then much reissued and augmented over the following two centuries. However, one of the few criticisms levelled at the 186 first edition of this work was the absence of maps.

This failing was remedied in the sixth edition of 1607 for which maps were commissioned from William Kip and William Hole. Drawing on the surveys of Christopher Saxton, John Norden and the Anonymous/William Smith series, they produced a series of 57 maps. 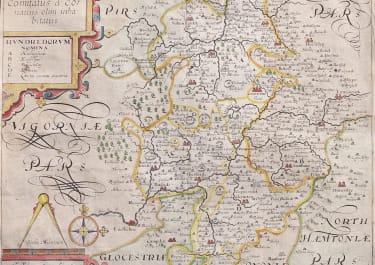