Extends from the North Sea and the Black Sea eastward as far as Siberia and the Behring Strait. Extends south to China and the Aral Sea and north to include the island of Nova Zembla and the Arctic. Color coded according to region with Russia in Europe toned in reds and pinks, and Russia in Asia in yellows and greens. This map is most interesting in its extreme eastern portions, which, when this map was drawn, had only recently been explored. The explorations of Vitus Behring are very much in evidence with regard to the form of Kamtschatka and the extreme northeast of Siberia. Shows nautical routes from Okotskoi Ostrog, in Siberia, ccross the Sea of Okotsk to Kamtschatka and the Kuril Islands. Sakhalin is curiously divided into two separate islands. Hokkaido appears as Matmay or Atkis.

Identifies Behring Island off the coast of Kamtschatka, where the great Arctic navigator ultimately met his doom. 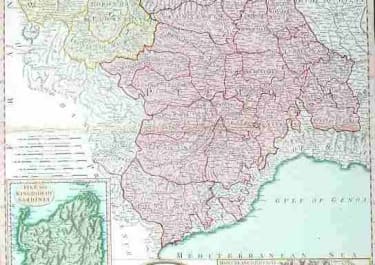 A NEW MAP OF THE DOMINIONS OF THE KING OF SARDINIA 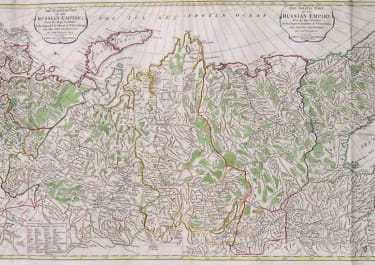 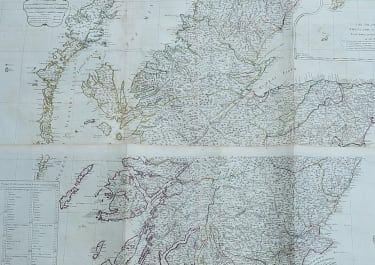