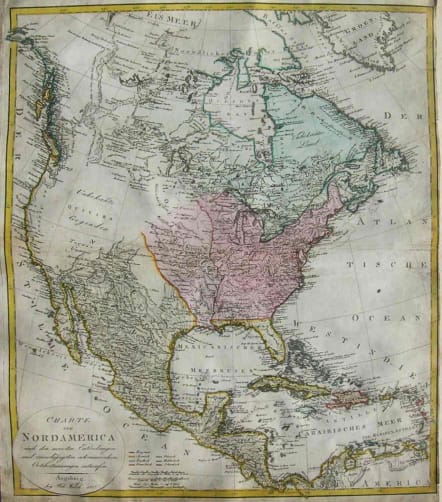 Rare and very interesting map. The State of Franklin.An early edition of this superb map of North America that was issued at one of the most interesting points in United States history shortly before the acquisition of the Louisiana Territory. Thus, it illustrates the young nation on the eve of the epic explorations of Lewis and Clark, with the vast western region labeled only Quivira, contrasting with the otherwise fine detail. Based largely on Arrowsmith's revised map of 1802 with information from Mackenzie and Fidler in the Canadian wilderness, it includes excellent detail along the northwest coast based on the voyages of Cook, Vancouver, and La Perouse. The map also presents an interesting picture of early development west of the Appalachian and Allegheny Mountains, with the region of present-day Ohio labeled Indiana, below which is Kentucki, and the proposed state of Franklin. This is one of the very few maps depicting the fledgling state of Franklin and it is not listed in Ashley Baynton-Williams' article in The Map Collector. The map includes a color key showing the various possessions of the English, United States, Spanish, French, Dutch, Danish and Swedish.